In addition, solar accounted for 58% of all new electricity-generating capacity added in the U.S. in Q1, with wind making up the majority of the remaining capacity.

2021 Q1 solar additions represent a new Q1 record and a 46% increase over Q1 2020. Utility-scale projects account for a majority of these installations, with a Q1 record of 3.6 GW. Residential solar sales also continued to grow, with 905 megawatts (MW) added in Q1 2021, an 11% increase over the same period last year. The commercial sector grew 19% over the same period of 2020, while community solar declined 15%. 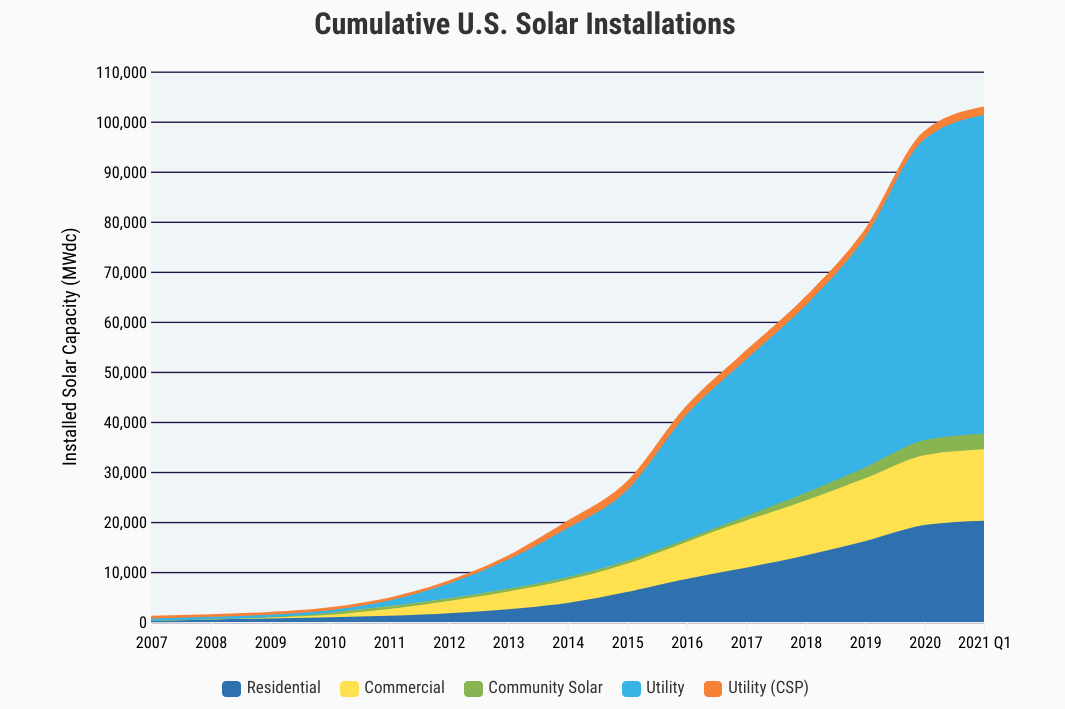 According to Wood Mackenzie, the solar Investment Tax Credit (ITC) will continue to be highly influential and will drive record growth and investment over the next three years. Their forecast calls for 160 GW of solar to be installed from 2021 to 2026, bringing total installed PV solar capacity to more than 250 GW by the end of 2026.

The report also notes rising costs in the solar industry as a potential limitation on growth. While average solar system prices remained relatively stable over the last six months, certain key inputs, including polysilicon, steel, aluminum, semiconductor chips, copper and other metals, are facing supply constraints. Though not yet factored into system costs, it is possible that these components cause price increases later this year.

The commercial solar market, which consists of on-site solar installations for businesses, non-profits and governments, has grown unevenly in recent years. The report cites evolving capital markets and financing tools as limiting growth. However, as a wider swath of business types gain access to financing, growth will persist in the commercial segment. Meanwhile, sustained adoption by large companies with aggressive clean energy goals will help push the segment to record levels in 2021. With less than 1% of commercial electricity demand served by on-site solar, there remains significant opportunity for growth in this segment.

Clean energy got a boost in the $1.4 trillion 2021 Omnibus Appropriations Bill that Congress passed on December 21. Highlights include an extension of the renewable energy tax credit and the production tax credit. In addition, $35 billion has been committed to energy research and development programs. The president signed the bill into law on… END_OF_DOCUMENT_TOKEN_TO_BE_REPLACED

By far the most common financing structure we see for solar tax equity is the power purchase agreement (PPA). That appears to be changing, however, as solar leases become more common. Though there is ample information available to solar customers about how various financing options compare, solar tax equity investors should also take time to… END_OF_DOCUMENT_TOKEN_TO_BE_REPLACED

More than 25% of investors are considering or actively engaged in ESG strategies, which bodes well for clean energy project finance. END_OF_DOCUMENT_TOKEN_TO_BE_REPLACED

A recently published report from Research and Markets highlights the opportunities for clean energy in data center growth over the next five years. The report, available at ResearchAndMarkets.com, estimates that global data center capacity is projected to grow at a compound annual growth rate of more than 25.5% through 2025. The report, entitled “Data Center… END_OF_DOCUMENT_TOKEN_TO_BE_REPLACED

As discussed in a recent article published in Real Assets Adviser, high net worth and family office investors are increasing portfolio allocations to cash flow investments. These cohorts join institutional investors in this shift, which benefits infrastructure and real estate asset classes. We have written frequently about the market drivers increasing the appeal of cash… END_OF_DOCUMENT_TOKEN_TO_BE_REPLACED

Sometimes we get so caught up in the details of clean energy project finance and investment that we take for granted how cool these systems really are. But we ran into a website recently that reminded us what we’re missing when we’re “down in the weeds.” www.untappedcities.com is a site that “unearths New York City’s most unique… END_OF_DOCUMENT_TOKEN_TO_BE_REPLACED

← Older posts
We use cookies on our website to give you the most relevant experience by remembering your preferences and repeat visits. By clicking “Accept”, you consent to the use of ALL the cookies.
Cookie settingsACCEPT
Manage consent

This website uses cookies to improve your experience while you navigate through the website. Out of these, the cookies that are categorized as necessary are stored on your browser as they are essential for the working of basic functionalities of the website. We also use third-party cookies that help us analyze and understand how you use this website. These cookies will be stored in your browser only with your consent. You also have the option to opt-out of these cookies. But opting out of some of these cookies may affect your browsing experience.
Necessary Always Enabled

Any cookies that may not be particularly necessary for the website to function and is used specifically to collect user personal data via analytics, ads, other embedded contents are termed as non-necessary cookies. It is mandatory to procure user consent prior to running these cookies on your website.

SAVE & ACCEPT
Send this to a friend