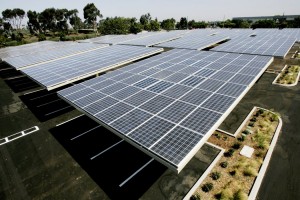 Commercial solar development is one such opportunity.  No doubt when I tell analysts, reporters and potential investors that commercial solar returns nearly 100% of invested equity in the first year, the proposition is met with the same “suspicion, cynicism and doubt” that Carlson had in mind.  But the math is simple and undeniable.  So please take a moment to consider the following table: 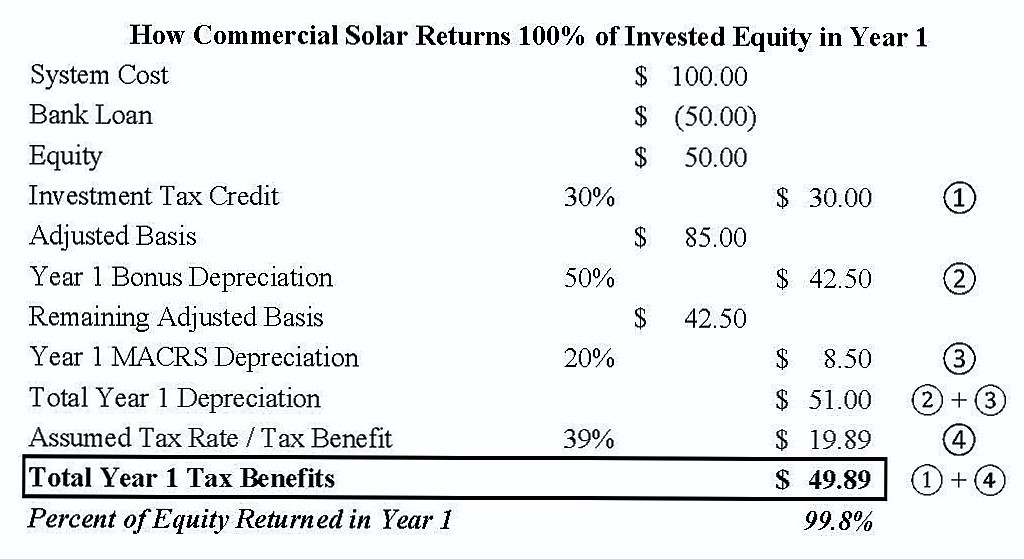 This investor return is in addition to distributable cash flow after debt service and required reserves.  It is essentially guaranteed, as it is available regardless of system performance, power purchase agreement terms or host credit.  Furthermore, all of these tax benefits are immediately available to reduce the investor’s tax liability.  That means that, as we have said before, your next federal income tax estimated payment could instead be invested in commercial solar because your current year tax bill is immediately reduced by 99.8% of the capital you invest.

Oh, and this ignores the impact on state taxes, which are also reduced by the $51 in depreciation deductions.  Of course, the state income tax impact will depend on in what state you reside, so we have used the most conservative case here.  Residents of states with high income tax rates such as California, New York, New Jersey, Connecticut and Pennsylvania benefit from meaningful reduction in state tax liability as well.

And don’t forget that in addition to being a sound economic investment, commercial solar is also a renewable energy source that reduces carbon emissions not only in the community where the system is installed but across the broader region as well.

So there you have it.  The facts are straightforward and the math is simple.  Still sound too good to be true?  Perhaps, but this is the outcome the Federal government intended in creating incentives for the development of renewable energy technology and systems.  Still, we would all do well to remember Mr. Carlson’s perspective on such circumstances.  Don’t allow “suspicion, cynicism, and doubt” to get in the way.  Instead, rely on information, education and trustworthy partners to guide you to excellent opportunities.  You can find our currently available projects here.

We use cookies on our website to give you the most relevant experience by remembering your preferences and repeat visits. By clicking “Accept”, you consent to the use of ALL the cookies.
Cookie settingsACCEPT
Manage consent

This website uses cookies to improve your experience while you navigate through the website. Out of these, the cookies that are categorized as necessary are stored on your browser as they are essential for the working of basic functionalities of the website. We also use third-party cookies that help us analyze and understand how you use this website. These cookies will be stored in your browser only with your consent. You also have the option to opt-out of these cookies. But opting out of some of these cookies may affect your browsing experience.
Necessary Always Enabled
Necessary cookies are absolutely essential for the website to function properly. This category only includes cookies that ensures basic functionalities and security features of the website. These cookies do not store any personal information.
Non-necessary
Any cookies that may not be particularly necessary for the website to function and is used specifically to collect user personal data via analytics, ads, other embedded contents are termed as non-necessary cookies. It is mandatory to procure user consent prior to running these cookies on your website.
SAVE & ACCEPT
Don't have an account yet? Register Now